Enough with the Destruction

I am an old hippie who has no use for the ways of the established order. Ask the CEO of any corporation or the principal of any school for which I’ve worked. Or the pastor of any church I’ve attended. Most “order” is based on outdated, controlling systems designed to destroy creativity, and hence freedom. That leads to injustice. 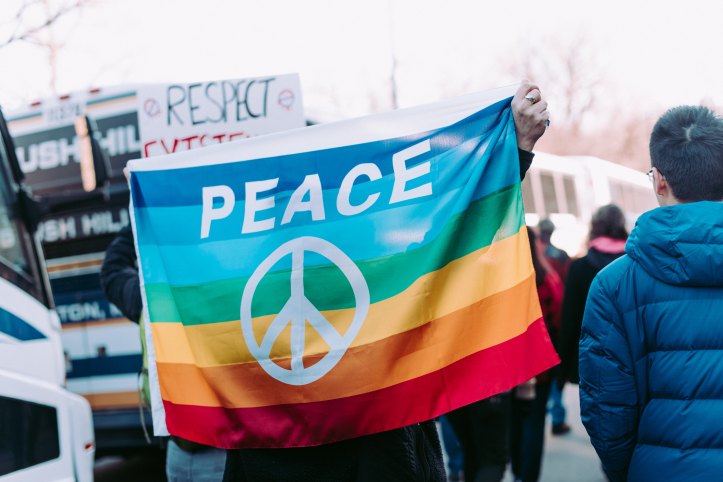 I still oppose “The Establishment” even though my generation is the establishment. I am with the disaffected and dissatisfied. I am not satisfied with the direction of our nation. I believe “Citizens United” has led us down the path of crony capitalism even worse than the Robber Barron era of the late 19th and early 20th centuries. In short, the inordinate control that corporations exert over our personal lives and political systems as a result of that Supreme Court decision have so polluted our national discourse that this outcome – violent resistance – was inevitable.

It is still unacceptable though. “The Resistance” must reject anarchy. Too many protesters are leaderless with no clear purpose short of destruction. If they wish to improve how our nation cares for the poor, vulnerable and the environment (I think that’s what they want other than Donald Trump’s head), they need leadership. Now.

That would – should – come from progressive clergy and politicians. The anarchists have legitimate complaints. There is truth to the saying, “If you want peace, work for justice.” There is plenty of injustice today. No ordinary American would ever enjoy the bailout received by Wall Street. Police departments do not need to be militarized. Energy companies such as Dominion and Duke should not be allowed to destroy the environment and seize private property through eminent domain to build fracking infrastructure. The War on Drugs is a complete failure, leading to the unjust imprisonment of tens of thousands of people, mostly minorities. We are spending more on the military than ever before even though we can’t muster the will to provide health coverage for all Americans.

So, one can understand the anger.

Violence, however, is not the answer.

To appreciate that, one needs a sense of history. There is talk on street corners no matter where I go that people say they’ve never seen our country in such a mess. I have. It was 1968.

The Vietnam War was at its peak, with thousands of young Americans subjected to an unjust draft. It was called the Selective Service System and it was very selective. If you were in college or could get a deferment because daddy had connections, you weren’t selected. So, eventually, the working class youth had enough of it and started burning draft cards, fleeing to Canada and even occupying buildings. Yes, there was some violence, especially at the Democratic National Convention, but that was largely precipitated by Chicago’s ruthless police.

Also in 1968, blacks, a century after the completion of the Civil War, were still having to fight for economic justice and attempts by white supremacists such as Alabama Governor George Wallace to deny them their constitutional rights.

The nightly news in 1968 was dominated by headlines about war, domestic unrest, racism, and political assassinations. We’ve been here before.

The most obvious attack upon the Civil Rights movement was the assassination of Martin Luther King Jr. But he was not the only person killed that year. So was Bobby Kennedy, as he closed in on the Democratic nomination for president. So were activists and students. The nightly news in 1968 was dominated by headlines about war, domestic unrest, racism, and political assassinations. We’ve been here before.

As I did then, I turn to music for guidance. The folk and rock protest music of the 1960s and 70s helped stop the Vietnam War. And, the most popular group of the decade, the Beatles, spoke to the madness of 1968 through their song, “Revolution,” which was released in November of that year. Compared to many other groups, such as Crosby, Stills, Nash & Young, the Beatles had been relatively silent on political issues – until John Lennon penned “Revolution.”

Well, 50 years later, nothing has changed. I want to change the world. There are literally as many ways to do that as there are people willing to do it. But when you are destructive, you lose me as an ally.

Being destructive is being lazy. It shows a lack of real thought about how to address our many disagreements. It sets a horrible example for our children, and converts nobody. It is unbecoming of a human being. So, if we wish to convince others to be more humane, we must set the example.

No violence. No destruction. Only love.

Try it. It is my experience that in the end, to be effective, you’ll only have time for love.