LENOIR, N.C. – Though born and raised a ridge-runner, I’ve enjoyed the ocean since I first ran and jumped into it at eight-years old. In my Bermuda shorts, t-shirt and converse tennis shoes.

Dad had driven the five of us over about 50 mountain ridges overnight to Myrtle Beach. It was 533 miles from our home, Clarksburg, W.Va. (I can remember that but can’t find the eyeglasses that are on my face). 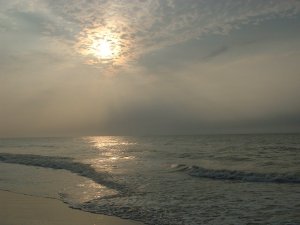 So, I woke up in the back of our Vista Cruiser station wagon along with my sisters in an early bright morning sun. There, outside the window, was the ocean. I got out the door, ran past my parents and proceeded to try and jump the surf. After I thought I had conquered the ocean, it cheated, hit me from behind, and in the surf my bottom landed. My mom likely and characteristically laughed, my dad was likely none too pleased, but he might also have been too tired to care, and my older sister probably just thought I was being silly. I probably tried to corrupt my little sister into joining me, as that was customary, but I can’t recall.

I may not remember all the details, but I remember that mom and dad were there. So were my sisters. And the great people that owned the motel we stayed at annually. And friends that came down from West Virginia at the same time. And a new “girlfriend” (I was probably all of 12) until she had to head back to Ohio after a few days … and mom cooking spaghetti in our efficiency. Dad taking us to play mini-golf. Mainly, days spent playing in the ocean and pool.

Today, on a rainy, chilly winter day, I’d really like to be at the beach. I long for such peace and memories. But isn’t that human nature? To want what you can’t have rather than enjoy what is before you?

Yep. Even so, while I generally prefer a day in the mountain woods to a day at the beach, there are times – the off-season – when I’ll instead take the solitude of an empty beach. The lapping of the waves, the sand in the toes, the wind, the endless horizon, work in concert to offer peace and a window into memories I find nowhere else. Into an age of innocence that, from time to time, is worth pondering.

Yes, many of these memories are captured in photo albums. But I like the meandering course my mind’s eye takes when it first hears the lap of those waves.

A quick note on these photos: during a very unusual week in a previous life, I found myself on both coasts of the U.S. in the same week. That might be customary for some people, but not me. In any event, I found myself watching the sunrise along the shoreline of the Atlantic Ocean near Garden City, S.C. on Monday. On Friday, in San Diego, we watched the sun set over the Pacific Ocean.